Method 2：Traditional wet-process phosphoric acid: It is produced from natural minerals. It contains many impurities and has a low concentration of phosphoric acid. Therefore, it cannot be used as a raw material for some industrial production, and can only be used as a fertilizer.

The reasons of foaming: In the production of wet-process phosphoric acid, when the content of phosphate and organic matter in the phosphate rock powder is high, a large amount of CO2 gas is generated by chemical reaction with acid. With the violent process of acid hydrolysis, CO2 is continuously dispersed in the liquid containing organic ingredients, forming a stable foam layer on the slurry surface. Its volume can usually reach 5%-10% of the volume of the reaction liquid, which has many adverse effects on production.

The hazards of foaming:

1. Affect the dispersion of phosphate rock powder and acidolysis reaction, resulting in a decline in production capacity;

2. The foam reduces equipment utilization, and makes it difficult to observe the material level;

3. The foam hinders the evaporation of water and the removal of heat during the reaction, leading to an increase in the reaction temperature of the extraction tank. What’s worse, foam will be brought to the tail suction system or even the diffuser in large quantities, causing P2O5 loss and environmental pollution.

The methods of eliminating the foam:

1. Mechanical defoaming: With the help of mechanical force or pressure change, the foam is broken to achieve the purpose of defoaming. The advantage is that there is no need to add any materials during the defoaming process, which avoids possible pollution caused by the addition of defoamers. But the defoaming effect is usually not as fast and effective as chemical defoaming. In addition, certain equipment investment and power consumption are required.

2. Chemical defoaming: At present, adding defoamer is recognized as a high efficiency method. Defoaming mechanism: When the insoluble gas is surrounded by the surrounding liquid, a hydrophobic group is generated instantly to extend into the bubble, and a hydrophilic group extends to the liquid, forming a very thin adsorption film. Due to the surface tension, the film shrinks into a sphere and forms a bubble. It is generally believed that there is an interface where the bubbles in the foam intersect, and the liquid has a tendency to flow at the interface. When the liquid film gradually becomes thinner to a certain level, the surface tension decreases and the foam will burst. When the defoamer is added, the defoamer enters the liquid film due to its lower surface tension and spreads on the surface of the solution, which will take away a layer of solution adjacent to the surface, causing the liquid film to become thin locally and the foam to burst. 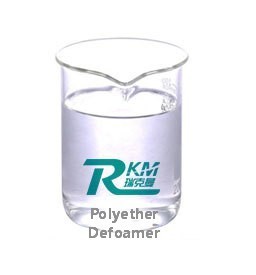