With the rapid development of modern industry and the increase of urban population, many countries are short of water. In order to solve the increasingly serious water shortage problem, seawater desalination has been adopted by many countries as an important way of water supply.

Seawater Desalination: The process of obtaining fresh water from seawater. At present, Reverse Osmosis Membrane method and Distillation method are the mainstream in the market.

The process of seawater desalination is easy to produce foam. If it is not eliminated in time, the processed water is not up to the standard of fresh water, which will affect the health of human drinking water.

1. Some additives are added in the desalination process, which inter-react and produce lots of foam;

2. Seawater contains a lot of microbes, which react with the air to create foam;

3. A large amount of active organic matter is produced after the desalination cycle is used, which is easy to produce foam;

4. When the dissolved oxygen is insufficient and the system is operating under low load, denitrifying foam tends to be generated；

5. During the operation, the seawater flowed or stirred irregularly, resulting in foam.

1. A large amount of foam causes the water quality of the desalinated seawater to fail to meet the standard, which affects human health after drinking；

Hence, defoamer&antifoam plays an important role in seawater desalination. Rickman has rich experience in Defoamer&Antifoam market, including in Sea Water Desalination. For this industry, our kindly advice is using Polyether defoamer, which does not block the treatment membrane and does not precipitate. For more detailed information, welcome to contact us to further discuss. Email: rickman09@126.com 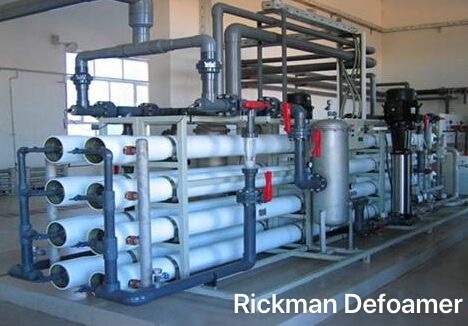